The Impossible Burger May Be Plant-Based, but Is It Vegan? Does It Matter? Perhaps Just as Importantly, Is It Healthy?

Previous Next
The Impossible Burger May Be Plant-Based, but Is It Vegan? Does It Matter? Perhaps Just as Importantly, Is It Healthy? 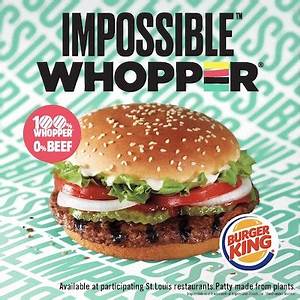 Is the Impossible Whopper a Whopping Lie?

I was recently lured into what turned out to be a kinda, sorta divisive thread on a vegan FB page about whether the Impossible Burger is truly vegan … and, gasp, whether it matters. (Spoiler alert: Yes, it matters, but not to everyone, not even to every vegan.) Going down that rabbit hole reminded me why I refrain from posting on FB forums but also helped me unpack the difference between “plant-based” and “vegan” & presented a perennial moral conundrum or two that I am still wrestling with, sort of.

On April 29, 2019, The Washington Post announced that “following a successful test run in St. Louis, Burger King … will introduce its Impossible Whopper to more cities this summer, with the goal of adding the popular plant-based burger to menus across the country by the end of the year.” The Impossible Burger has been making waves since it was introduced last year & this was like a tsunami of good news for fast-food lovers of all stripes: trying-to-not-be meat-eaters could get their burger fix without having to eat meat, vegans didn’t have to exile themselves from the chain, & carnivores & plantivores could hang & eat together. Too good to be true? I’ll let you decide.

Impossible Foods was founded by people who identify as ethical vegans, and in order to get FDA approval for their product, they decided to test one ingredient on rats, which were killed in the process. The FDA did not require them to use that ingredient, but it is the proprietary ingredient that makes their burger “bleed,” which, the thinking went, would make it more appealing to meat-eaters, & getting a thumbs-up from the FDA would apparently make distribution easier in the short term & mean fewer cows killed in the long term.

To Be Ethical or Environmental (or Both)

“The term ethical vegan,” says Wiki, “is often applied to those who not only follow a vegan diet but extend the philosophy into other areas of their lives, and oppose the use of animals for any purpose.” Which would mean not using cows for leather, bees for honey, rats for testing products, right?

Maybe ethical is a typo & the founders meant environmental, because environmental veganism “refers to the avoidance of animal products on the premise that the industrial farming of animals is environmentally damaging and unsustainable.” Because, according to Impossible Foods’ mission statement, “using animals to make meat is a prehistoric and destructive technology: animal agriculture occupies almost half the land on earth, consumes a quarter of our freshwater, and destroys our ecosystems.” Their plant-based burger uses 96% less land & 87% less water & produces 89% fewer emissions than a conventional beef burger.

That’s all great! Bravo! It’s a giant step toward sustainably feeding the planet! I’m not trying to quibble over how they define themselves & categorize their product. I get that appealing to people’s own self-interest in a healthy environment may be an easier sell than asking them to consider the well-being of our non-human planet-mates. I am just trying to understand whether the company is in alignment with its purported values & exactly what they are, for starters.

Anyhoo, when I said, in the FB thread, that I wouldn’t be eating the burger because, as a yogi & as a vegan, the killing of animals is verboten to me, not to mention that I don’t eat highly processed food, I got kinda blasted for, for one thing, not seeing the bigger picture: that the mass availability of the Impossible Burger/Whopper means way fewer animals being killed in the long run. I was accused of boycotting the Impossible Burger & thus being responsible for bringing down a business that was trying to do good in the world.

Really? I don’t eat at Native Foods & that chain is thriving as far as I know. I don’t eat Annie’s mac ‘n’ cheese & I’m sure she doesn’t care. And if I were going to spend my energy deliberately taking down a business, it would be Big efffing Oil.

When I added that, according to the laws of karma, nothing good can come from something bad, I was accused of telling people who champion the Impossible Burger that they were bad (no, I was just sharing my worldview) &, again, that I wasn’t seeing the big picture: that a few dead rats in the scheme of things wasn’t such a big deal, that the killing was done, rats weren’t going to continue to be killed every time Impossible Burgers rolled off the assembly line.

That logic (the end justifies the means; a few lives lost to save many, many, many more lives in the future is just taking one for the team) seems like a pretty darn slippery slope: who gets to decide when it’s OK to kill & when it’s not, when a lesser evil is, well, lesser, preferable, necessary? & was it really necessary? I mean, Beyond Burger got to market without testing on animals.

A Better Choice Does not Mean a Good Choice

Is the Impossible Whopper a better, ethical, choice than the regular whopper? Is it vegan? Does it matter? Was I being impossible? I decided to check in with the vegan shock squad. Not surprisingly, PETA took a hardline approach: “How could anyone feel good about eating something from a company that chose to feed caged rats ‘massive doses’ of a substance before they were killed and their bodies were cut up?” Karen Dawn, whose DawnWatch advocates for animals, didn’t exactly condone the animal testing, but took an “it’s over, let’s move on approach,” writing: “Continuing to punish the company will not bring back those rats, but it will hurt cows, and every other animal destined to benefit from the stunning rise of the Impossible Burger.”

There seems to be an “if you’re not asked, don’t tell” vibe out there in parts of the vegan-sphere, lest the truth, the outing of Impossible, punishes, ruins the company & thus its efforts to create the more peaceable planet we all want to inhabit. Sorry, but I was asked in a public forum & I told my truth—I was not going to William-Barr-ify it. How does propping up a regime by obfuscating the facts create the kind of world I want to live in? It doesn’t.

And outing Impossible Burger for what? As far as I can tell, they’re not claiming their product is vegan, just plant-based, but that distinction seems to be a red line for some vegans, who consider those who cross it, & support the company and/or eat the burger, not true vegans & want to tar & fake-feather them. Of course, there are vegans who would never even use fake feathers, just as they would never wear fake fur, because, ya know. Are you more vegan if you don’t wear fake fur? Are you a better vegan? There is such a broad spectrum & becoming/being vegan is a process.

Can’t we all just get along & stop trying to own & define a label, stop telling other people how to live their lives? Can’t we all just make decisions for ourselves, & no one else, based on our own research, using our own moral compass? I was evidently in a cave back in 2018, but Jessica Hoar wrote a great blog post for LiveKindly that tied the controversy up in a nice bow. 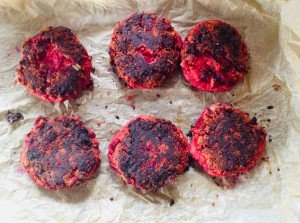 You can’t, um, beet this burger!

I personally (you can do what you want & I’ll still probably like you!) take many things into consideration when deciding what to put in my mouth. It must be vegan. It must (well, 98% of the time) be healthy. And it must be sustainably packaged if it must be packaged. I once ate & enjoyed the Beyond Burger … at my local Whole Foods. But it is processed—if you can’t count the ingredients on two hands, there are too many; if you can’t pronounce them? Fuhgeddaboutit! At least the Beyond Burger is soy-, gluten-, & GMO-free, which is more than anyone (see Bonus Trax below) is saying about the Impossible Burger. Sorry, but it’s true!

For deliciousness & environmental & financial & quality-control purposes, I prefer to make my own damn food.

My fave burger is a bright pinky-red beet burger (see pic), which, yes, does involve shopping & chopping. But you can make a big batch & freeze ’em—& then you’ll have your own fast but healthful food whenever you want it. My mom loves them & she’s not plant-based or vegan—although she likes to pretend she is when she hangs out with me!

Meanwhile, I’d love for you to share your thoughts, so please do. And please sign up for my newsletter and/or daily bliss. Thanks for reading!