Blissninny (bliss ninny) goes back to a time before I’d embodied Joseph Campbell’s famous advise to “follow your bliss” but was evidently unconsciously desiring to do just that. I was also experimenting with, ugh, online-dating (not that I thought it was the path to bliss but because I wasn’t meeting anyone special in my regular travels) & connected with a dude several states away who happened to be a fire eater—really! In the course of our conversation (which would take rummaging through a box of decade-old journals to recount verbatim), we touched on dropping into a state of flow: he got there by swallowing fire, I in moments of writing, meditating, racing my bike. “Ahhhhh,” he proclaimed, “you’re a blissninny!”

He didn’t stick, but the moniker did. Like a spiritual name, it was equally a reflection of my true (obviously still-hidden-to-me) nature, of my goal in life & of the means to achieve that goal. And it planted the seed for my blog: a place where I could follow my own bliss, where I could write about what I wanted to write about, the way I wanted to write about it, in the hopes of bringing more bliss to the world—more connection, a greater sense of personal agency, a better life for everyone & everything.

Who Am I? Where Have I been? 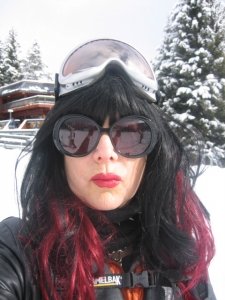 A very wise man once said, “If you don’t believe in past lives, how many lives have you already lived?” Hmmm, how many lives have I lived? I grew up in Los Angeles, but when black became my favorite color, I had to move to New York. And when I couldn’t stop jonesing to see mountains outside my windows rather than steel-and-glass monoliths, I had to move to Colorado. … I gorged on Milk Duds & Mint Milanos & McDonald’s during my formative years, & have been kosher (a blip on the time line), vegetarian, a carb-free carnivore, raw & vegan. … I’ve been a ballet dancer, a punkette, a New York Times editor & writer, a fictionista & a barista & a bartender & a bike racer (I’ve got the scars to prove it!), & now, I am indeed following my bliss — living in Boulder, teaching Jivamukti Yoga wherever holy beings are craving an authentic yoga experience, becoming a jyotish (Vedic astrologer) — & sharing the bliss every way I can.

I would love to hear from you. Please contact me via the form below:

Get All the Bliss!

Sign up to receive my quarterly(ish) newsletter and/or Daily Bliss, both filled with resources & inspiration to live a more enlightened life!